Gay Life for baritone and piano

Gay Life was initially envisioned as a cycle of eight songs, each touching on the "gay experience" from a different angle. The music came to me in a burst — a burst, really, of gay pride. It began in august 1996 as s result of my experience at The Body Electric School's weeklong retreat called "The Dear Love of Comrades." As well, I encountered the poetry serendipitously. The first two songs are settings of poetry created spontaneously by two comrades during the excitement and joy of the retreat. After a Lincoln Center concert where both Allen Ginsberg and I performed, I asked the iconoclastic poet to recommend some of his favorite erotic poetry. In his simple, Buddhist way, he responded by handing me a copy of his own poetry, dog-eared to his favorites. Paul Monette's mourning of his lover, Rog, in "Here," touched on my own loss of a lover. The brief Thom Gunn poem, fueled by my mother's sudden death, spun itself out into a fifteen-minute farewell. To bind the songs more closely, I composed interludes connecting each to the next. (Alternate endings, however, permit individual songs to be extracted as stand-alone pieces.)

The cycle begins with Michael Calhoun's "Ode to Wildwood." Wildwood is the Body Electric School's retreat center, and the ode's "Julie Andrews" allusion takes us to Julie Andrews point, a scenic overlook there that to many is reminiscent of the alpine setting of The Sound of Music. With major and minor tonalities rubbing elbows, "Ode to Wildwood" is a rag reminiscent of the sinewy rags of Scott Joplin. The spirited music evokes the unalloyed joy of gay men exulting in a safe environment. Near the end, a line of the poem is deconstructed: through fragmented repetitions, the words "the spirit in my being and the animal in my soul" are chanted, mantra-like, over and over. The song's final phrases are ecstatic, and a brief interlude follows.

"In the Temple," a poem by Wilson Hand Kidde, describes a contemplative setting in which the poet welds spirituality to eroticism. The temple in question is a beautiful sacred space at Wildwood where ritual work is taught and practiced. "In the Temple" is a him (ahem, a hymn! —editor's note) to sensual awareness. In fact, it ends with my own prayerful addition — 'Ah! Men!' The text is declaimed at a moderate tempo (allegretto) to a rather stately melody. Beginning stepwise after the fashion of a chat, the melody turns into a less soothing progression of intervals as the singer acknowledges "the sweet fire in my veins, so hard to tame." The interlude — a touch of counterpoint, a thinning of the instrumental texture, a sudden fortissimo outburst — leads to the two Allen Ginsberg settings.

Throughout the world, the "personal" advertisement provides a time-honored method for potential lovers to meet each other. In the United States, such advertisements enjoyed a vogue a century ago; when they in recent years re-emerged in popularity, the gay community embraced the "personals" with enthusiasm. In "Personals Ad," a businesslike, almost comical, setting is given to what is ultimately a touching poem, full of tenderness and the advertiser's manifest sincerity. The subsequent interlude builds from near-stasis, heating up (incalzando) to the festive outburst of the fourth song.

Gay Pride Weekend gets marked on the calendars of gay men and lesbians long before it occurs, late each spring. For many, the Gay Pride parades held in many cities serve as the year's most dramatic outward expression of social and political solidarity. "After the Parade" is a fast, lively song unfolding over a moto perpetuo accompaniment. The interludes evoke a brass band, and rowdiness seems always near. But of course, in the age of AIDS, the celebrations are necessarily bittersweet. The ebullience of the opening march music is tempered by recollection of 'the Corridors of Death" (subito piano — "suddenly quiet"), sung to the pained interval of the tritone. After that, the accompaniment returns jubilantly to descending scales, passed from register to register, until the energy is finally spent.

The tragedy grows still more personal with Paul Monette's "Here," as open fifths provide a stark accompaniment to a man's shell-shocked soliloquy, intoned on a single pitch: He lies beside his lover's grave, remembering the horror of the final weeks. Emptiness is the hallmark of this quiet piece, but ultimately anger, sorrow and despair well up and are released in a final wail. "Here" is written in memory of my lover, Paul Arcomano, who died of AIDS in 1993, at thirty-four. Six-foot-three, devastatingly handsome, twenty years my junior, we were together for seven years. This song was written in one day, and I cried the whole time — the first, and only, time this has happened. The subsequent interlude's long decrescendo brings emotional respite.

Despite our respite, we remain in the world of sober thoughts. The cycle's finale, Thom Gunn's "Memory Unsettled (A Farewell)," is a further meditation on death, suggesting that its imminence can inspire acts of potent charity. Though "Memory Unsettled" is but four short verses, me setting is in excess of fifteen minutes — by far the longest song of Gay Life. It is, in fact, a farewell — to my mother, to lost lovers and friends, to all that must eventually fall away. As the song winds down, however, I allow memory to settle into ecstatic reverie...of beauty...of fragility...of the sweetness of life...of the embrace of love. The words "Remember me — We will remember you" are repeated, litany-like, throughout the piece. In fact, the singer at one point is in dialogue with himself, taking two roles — the rememberer and the remembering. Because the words, "Remember me" evoke the text of Dido's famous Lament (from Purcell's opera Dido and Aeneas), I quote, in very special moments, Purcell's own setting of these words. Towards the end, a gloss on the Lament shades into a quote of the concluding measures of Wagner's Liebestod, under which the song's main theme returns in a communion of grief spanning three centuries and as many musical styles. At length, in a glowing haze of B-major tremolos, the song serenely dies away.

The first was during his mid-20s when, feeling creatively blocked, he dared to compose for pleasure. The second came when he re-embraced tonality, becoming a trailblazer for the Neo-Romantic movement. The third involved integrating his complete personality into his work and celebrating his identity as a gay man.

The signature piece of this latest phase is "Gay Life," a 45-minute cycle of six songs for baritone and orchestra, commissioned and given its premiere in 2001 by the San Francisco Symphony. On Tuesday night at The Graduate Center at CUNY in Midtown, the work received its New York premiere in a new arrangement for two tenors and piano, here the dynamic vocalists Rob Frankenberry and Dennis Tobenski, with Mr. Del Tredici, an accomplished pianist, at the keyboard. The free event, which included engaging and distinctive song cycles by Chester Biscardi, Darien Shulman, Roger Zahab and Mr. Tobenski, part of the Tobenski-Algera Concert Series, also acknowledged Mr. Del Tredici's 70th birthday.

In 1996 Mr. Del Tredici received poems from Michael D. Calhoun and W. H. Kidde about an experience the three had shared in an empowering body-focused workshop in Wildwood, Calif. Mr. Del Tredici began setting them immediately, the first texts he had set in 20 years that were not drawn from Lewis Carroll's "Alice" books.

These songs, "Ode to Wildwood" and "In the Temple," open the "Gay Life" cycle. In each the music pulsates with plush tonal harmonies and Straussian lyrical extravagance. Still, an obsessive element makes the music seem disorienting and modern. The piano writing is thick with clashing dissonances and unhinged harmonic outbursts. The third song, a setting of Allen Ginsberg's "Personals Ad," which gently riffs the entries in gay newspapers, is a compact and punchy work that eventually bursts into cascades of chords. "After the Big Parade," a setting of another Ginsberg poem, describes the specter of disease and hostility that impeded the joy of the 1991 Gay Pride Day parade. The music has a crazed Ives-like energy, teetering between exuberance and terror.

Mr. Del Tredici dedicates the fifth song, his moody setting of Paul Monette's "Here," a graveside eulogy, to Paul Arcomano, his partner, who died of AIDS in 1993. The final song turns the shortest poem, Thom Gunn's "Memory Unsettled," into a 15-minute rumination. In the final episode, Mr. Frankenberry and Mr. Tobenski traded the phrase "We remember you" over and over. Though the music is emotionally indulgent, the unflinching excess captivates you.

Though the piano part, adapted from the orchestral score, is awkwardly difficult, Mr. Del Tredici handled it ably to create swirling sonorities. Surely one of New York's orchestras should present this major work by a significant New York composer as it was originally conceived. 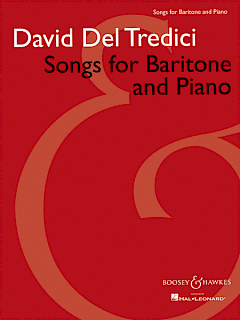