David at the Virginia Center for the Creative Arts, Photo by Karen Bell

With the appearance in 1976 of Final Alice, David Del Tredici's hour-long setting of Lewis Carroll for high soprano and large orchestra, a new movement in music, Neo-Romanticism, was born. Not only did Del Tredici forge for himself a fresh compositional path, but at the same time gave hope to a generation of young composers seeking a new way of composing.

"All the way from Orchestra Hall to the parking garage patrons could be heard humming snatches of the music and expressing their delight. It was the most enthusiastic reception of a new work that I have ever heard at a symphony concert."

"Mr. Del Tredici may well have composed one of the few repertory works for full orchestra since 1950"

"Del Tredici," said Aaron Copland, "is that rare find among composers – a creator with a truly original gift. I venture to say that his music is certain to make a lasting impression on the American musical scene. I know of no other composer of his generation who composes music of greater freshness and daring, or with more personality."

Final Alice is but one of a number of Alice in Wonderland settings written over a span of more than 25 years (1968-1995). Final Alice was followed by In Memory of a Summer Day, which was awarded the 1980 Pulitzer Prize in Music. Both Final Alice and In Memory of A Summer Day became best-selling classical music recordings. A word on the chronology: preceding the two mammoth works mentioned above there was Pop-Pourri (1968), An Alice Symphony (1969), Adventures Underground (1971) and Vintage Alice (1972), and afterwards came Quaint Events, Happy Voices, and All in the Golden Afternoon (these three works in combination with In Memory of a Summer Day comprise the evening-long Child Alice (1977-1981)). Haddocks' Eyes appeared in 1985, and the last work in the series, the 90-minute opera Dum Dee Tweedle (1990-1995) was premiered in concert form by Leonard Slatkin and the Detroit Symphony.

Del Tredici's early works, in a more dissonant idiom, also focused obsessively on a single author – this time, James Joyce. The fruits of their union were many (1960-1966): Six Songs on Texts of James Joyce, I Hear an Army, Night Conjure-Verse and the tour de force for soprano and 16 instruments, Syzygy.

In Del Tredici's Post-Alice world, he has taken a startlingly different tack — to create a body of music that celebrates his own gay sexuality. Among these is Gay Life (poetry of Ginsberg, Monette and Gunn; commissioned by Michael Tilson Thomas and the San Francisco Symphony), Love Addiction (a baritone/piano song cycle to poetry of John Kelly commissioned in honor of the composers 70th birthday), and Wondrous the Merge (a melodrama for baritone and string quartet to the poetry of James Broughton). The recent Bullycide for piano and string sextet, a composition dealing with gay teen suicide as a result of bullying, has garnered Mr. Del Tredici considerable media attention. OUT Magazine has twice named the composer one of its People of the Year.

Del Tredici has also been active in the intimate world of chamber music. His recent works include two string quartets (commissioned by the Da Ponte and Orion string quartets), Magyar Madness (a clarinet quintet for David Krakauer and the Orion string quartet), and Grand Trio (for the Kalichstein-Laredo-Robinson Trio). Quite suddenly, too, there has been a profusion of works for solo piano reflecting Del Tredici's own musical beginnings as a piano prodigy. These include Mandango, Gotham Glory, Three Gymnopedies, and S/M Ballade. Boosey & Hawkes has published two volumes of works for solo piano solo.

Ever extravagant, Del Tredici remains a forceful presence on the musical scene. While Composer-In-Residence with the New York Philharmonic in the 90's, Leonard Bernstein recorded his orchestral piece Tattoo, and Zubin Mehta recorded both Haddocks' Eyes, and Steps, a work written during his tenure at the Philharmonic. Paul Revere's Ride for soprano, chorus, and orchestra was commissioned by Robert Spano and the Atlanta Symphony, nominated for the 49th annual Grammy Awards as the Best New Classical Composition and issued on a Teldec CD. Rip Van Winkle, commissioned by Leonard Slatkin and the National Symphony Orchestra, is an adaptation of the iconic Longfellow story for narrator and orchestra, and was premiered by Broadway superstar Brian Stokes Mitchell.

Del Tredici has been on the faculties of Harvard and Boston Universities, and for more than 25 years, Distinguished Professor of Music at The City College of New York. He lives in Manhattan’s West Village. 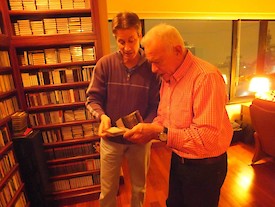 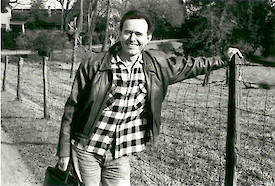 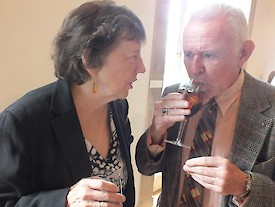