Del Tredici’s next work, Child Alice, which he composed over the course of five years from 1977 to 1981, was even more ambitious and even more firmly rooted in the language of functional tonality. A massive evening-length work in two parts spanning over two hours, Child Alice completely eschews most of the contemporary trappings that still pervaded Del Tredici’s music all the way up until Final Alice. The “folk group” of saxophones, mandolin, banjo, and accordion is now gone as are other clearly modern elements such as a theremin—an eerie electronic instrument which appeared in the orchestration of several of his earlier Alice settings. The singer no longer serves as narrator; instead the orchestra becomes the narrator surrounding the singing with musical elaboration. In one concession to the present day the singer remains amplified (though much more subtly and mostly to ensure that the ornate solo vocal lines can be heard over an extremely large orchestra which includes triple winds, quadruple brass, and five percussionists). Rather than setting passages from the narratives of Alice’s Adventures in Wonderland and Through the Looking Glass, Del Tredici here composed multiple musical settings of each of the preface poems which precede these two novels. As Del Tredici describes it, “the first setting is the poem as understood by a child: sweet, simple, innocent. The long orchestral interlude that follows, is, I like to think, a tale that got away—something Carroll improvised for the children but neglected to put into print. Then the second setting is the poem as felt by the adult: loving, complex, tortured.” Child Alice is an attempt to address the complex psychological relationship between the historic Dodgson and his child muse, a relationship that will forever remain a mystery. 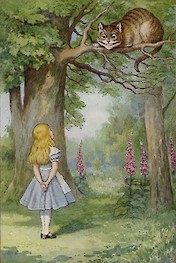 As was the case with An Alice Symphony, practical temporal considerations have resulted in the various parts of Child Alice each having independent performance lives which is how, to this day, this music has mostly been performed. The second part of Child Alice consists of three separable works: Quaint Events, which was commissioned and first performed by the Buffalo Philharmonic in 1981; the completely orchestral Happy Voices (the “tale that got away”) which was commissioned and first performed by the San Francisco Symphony in 1980; and All in the Golden Afternoon commissioned in 1981 by the Philadelphia Orchestra and first performed with Eugene Ormandy conducting. The first integral performance of the entire Child Alice took place in Carnegie Hall in 1986 with John Mauceri conducting the American Symphony Orchestra. One change, however, was made: considering the demands too great for a single singer the conductor divided the solo line between three different sopranos (Tracy Dahl, Victoria Livengood, and Dawn Upshaw). It was not until March 2016 that the work received a second performance, in Boston with Gil Rose conducting the Boston Modern Orchestra Project and soprano Courtenay Budd, who sang the entire work herself. The work was subsequently recorded for future commercial release.

Part one of Child Alice is the 60-minute In Memory of a Summer Day. It was commissioned by Leonard Slatkin and the Saint Louis Symphony and premiered in February 1980 with Phyllis Bryn-Julson as the soprano soloist. Barely a few months after this first performance, this self-contained work was awarded the 1980 Pulitzer Prize in Music—a resounding affirmation for the musical path that David Del Tredici had chosen.

Although Child Alice seemed like an apotheosis and an extremely tough act to follow, Del Tredici’s infatuation with this fertile material continued for more than a decade and his most ambitious Alice-related piece was still to come. In 1986, between the Scylla and Charybdis of Child Alice and the opera Dum Dee Tweedle, Del Tredici tucked in a chamber-sized, 10 instrument Alice piece, called Haddocks’ Eyes, which was commissioned by the Chamber Music Society of Lincoln Center. Here he returns to his favorite format of a solo female voice singing and narrating with instrumental accompaniment. The selection of text, as with Child Alice, deals as much with the personal relationship between Carroll and the real life Alice as with the story itself.

By the latter half of the 1980s into the 1990s, Del Tredici had composed three large scale orchestral works that were completely unrelated to Lewis Carroll, though each of these works continued his tonality rooted path. In addition, he composed a number of smaller-scale solo and chamber works derived from Alice-related musical material. 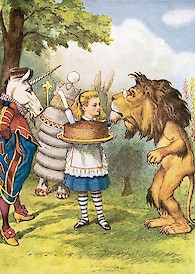 But in 1992, Del Tredici completed a work requiring the largest forces of any of his Alice pieces and indeed anything else he had composed to date: Dum Dee Tweedle, an 80-minute opera in ten scenes and a finale for narrator, soprano, alto, tenor, and baritone soloists, plus chorus and orchestra. It is the only one of the Alice pieces besides the very first one, Pop-Pourri, to include a chorus. But it is in no way a return to that earlier sound world. It is perhaps the “happiest” of all of the Alice pieces, with non-stop relentlessly fast music. It is a particular tour-de-force for the narrator who portrays all of the characters in the narrative; the text sung by the soloists and chorus serve more as commentary than story propeller, which is why—though Del Tredici and others have described the work as an “opera” and it certainly is operatic in scale—it is more akin to such ultimately unclassifiable works in the repertoire as Roméo et Juliette and La Damnation de Faust by Hector Berlioz, one of Del Tredici’s compositional heroes. Dum Dee Tweedle’s massive personnel requirements have made opportunities for presenting it challenging and the work remained unperformed for decades. In November 2013, the Detroit Symphony Orchestra finally mounted the world premiere performance of Dum Dee Tweedle with an all-star cast under the direction of the composer’s long-time champion Leonard Slatkin, the conductor who had premiered Del Tredici’s Pulitzer Prize-winning In Memory of a Summer’s Day more than 30 years earlier. Dum Dee Tweedle is exciting as well as powerful and—like virtually all of the music that Del Tredici has created since his return to tonality—it is also often ravishingly beautiful despite its frenetic pace. It is a counterweight to the overtly romantic Final Alice/ Child Alice and the unbridled zaniness of the earlier Alice pieces.

Even though Lewis Carroll’s writings are still in David Del Tredici's thoughts (he'd consider composing additional settings should the opportunity arise), it has been nearly two decades since he has created an Alice-inspired piece. In these recent years, Del Tredici’s compositional career has revolved around a new topical focus—themes related to a gay sensibility. The direct emotional appeal of these newer, deeply personal and often autobiographical works—which range from numerous solo piano and chamber music compositions to song cycles and large scale works for soloists and orchestra—complete his embrace of the resources of tonal harmony.

Given their ultimate position in the trajectory of his career, it is tempting to characterize these Alice pieces as a transitional phase in Del Tredici’s output between his early serial works to his full flowering as a completely unabashedly tonal neo-romantic composer in the 21st century. But this fascinating repertoire is much more than that. The nearly eight hours of original music contained in these pieces constitute one of the most significant achievements in the history of American music.

ASCAP award winning composer and music journalist Frank J. Oteri is the Composer Advocate at New Music USA as well as the Co-Editor of its web magazine NewMusicBox (www.newmusicbox.org). He also serves on the Executive Committee of the International Society for Contemporary Music (ISCM). 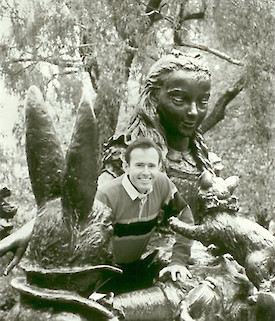 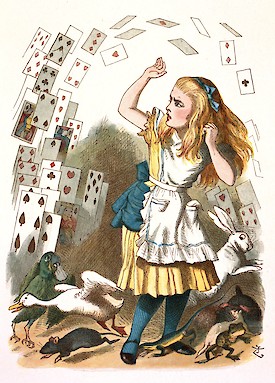 The Alice Works A Chronological Tree

Aside from the seven large-scale orchestra compositions inspired by Lewis Carroll’s Alice there are a number of smaller-scale works that David Del Tredici has composed based on material from these larger pieces. In 1983, on a commission from the American Harp Society, he created Acrostic Paraphrase, a solo harp composition derived from his popular “Acrostic Song” from Final Alice. A year later, he completed his first solo piano composition in more than 20 years—Virtuoso Alice, a dazzling fantasia also inspired by “Acrostic Song” that is in the spirit of Franz Liszt’s pianistic re-imaginings of Wagnerian operas and the freewheeling interpretations of golden age keyboard legends such as Josef Hofmann and Vladimir De Pachmann. (A formidable pianist in his own right, Del Tredici had appeared as a piano soloist in the 1950s starting at the age of 17 with the San Francisco Symphony performing concertos by Liszt and Tchaikovsky under the direction of Arthur Fiedler and initially planned to have a career as a concert pianist until he attended Darius Milhaud’s composition seminar at Aspen.) The daredevil Virtuoso Alice, which Del Tredici has performed himself on several occasions, rekindled his interest in solo piano music, a medium which has been a significant part of his recent oeuvre. A decade later he composed another paraphrase of “Acrostic Song”—Cello Acrostic—for unaccompanied cello. Around the same time as Virtuoso Alice, he made the first of many arrangements of “Acrostic Song”—for flute and piano. (There are currently eight arrangements of “Acrostic Song” in his catalog, several of which are his own and some of which are the work of others.) The flute and piano arrangement of “Acrostic Song” was Del Tredici’s first foray into chamber music after re-embracing tonality, another idiom which has figured prominently in his compositional output of the past twenty years. But the composition which is the clearest harbinger of his more recent chamber music forays is undoubtedly Heavy Metal Alice, completed in 1992. A recasting of several sections of Final Alice culminating with an elaborate set of variations based on “Acrostic Song,” Heavy Metal Alice is one of the most challenging as well as one of the most satisfying works ever created for brass quintet.

Finally in 1996 to honor the 80th birthday of fellow San Franciscan Yehudi Menuhin, Del Tredici reworked material from Dum Dee Tweedle into a relative brief work (just 10 minutes) scored for the unusual combination of soprano, chorus, clarinet, four solo violins, and orchestra called Cabbages and Kings. The premiere, which was conducted by Menuhin, also reunited soprano soloist Barbara Hendricks, who had sung in the premiere as well as the recording of Final Alice, with David Del Tredici’s music.

plus at least eight different arrangements to date, both by the composer and others, of “Acrostic Song”